Every now and then a reader will write me and chide me, most always in a  joking way, for causing them to buy an Instant Pot or an air fryer or something else but they never get any sympathy from me. I almost always say to myself “Thank goodness there’s someone else out there who does the exact same crazy things I do!” Seriously, how would you know you needed things if I didn’t tell you?  🙂

Last night, about 8 or 9, I was tired . . I had slept maybe 3 hours Thursday night. I should have gone to bed but decided to glance at Facebook one last time and read a post from a friend who shared that Craftsy classes are all on sale for $20 or less. From there, the conversation went downhill . . at least for Vince’s bank account.

Here’s how that Facebook discussion went. My friend’s name has been changed out for a butterfly! She had been talking to her daughter about a Cover Stitch class she signed up for at Craftsy. 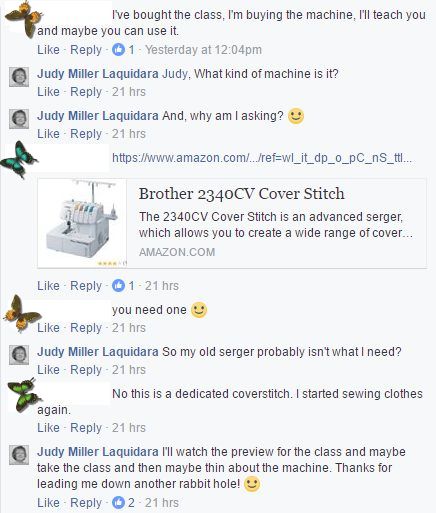 After that discussion, I looked at Vince and I think there’s a certain look when I’m about to do something I probably shouldn’t do. He said “WHAT?”

Me: I think I need a new machine.
Vince: No! What kind of machine?
Me: Kinda like a sewing machine.
Vince: Why do you need another sewing machine?
Me: It isn’t a sewing machine, it does something else.
Vince: What?
Me:  I’m not real sure. I need to read about it.
Vince: So you need a machine but you aren’t real sure what it does?
Me: Yes, my friend is getting one.
Vince: Does it hem men’s pants? (Most machines don’t do that,  you know? I’ve told him that for so long he believes it!)
Me: Nope . . not the kind of machine that would hem men’s pants.
Vince: Can you think about it tonight and we’ll discuss it tomorrow? Maybe sleeping on it, you’ll decide you don’t need it.

You know what that meant? Another sleepless night! In the grand scheme of things, it isn’t that expensive . . it’s just something else to add to the already too much stuff I have. We just this week had another one of those “We have to stop spending so much . . I’m going to retire soon” conversations.

I was up again til after 3 a.m. and up at 6 a.m. I woke up and said “Can we talk about that machine?” Apparently he had thought of something he wanted so he said “If it’s ok if I get this, then you can get that!” Done! Til I said .  . I forgot to mention that I need a bigger sewing room. You don’t want to know what he said to that!

Then he said . . let’s go to town. We’ll get breakfast out, go do our shopping and be home before the rain. (It’s almost 5 p.m. and we still haven’t had the predicted rains.)

One of our stops was Aldi, where I found this little table. I used to get these at Staples but our Staples closed. I love these tables. I think a couple have ended up in Vince’s shop and are dirty and stained, I think a couple ended up at Chad’s house and I am down to one or two in the sewing room. 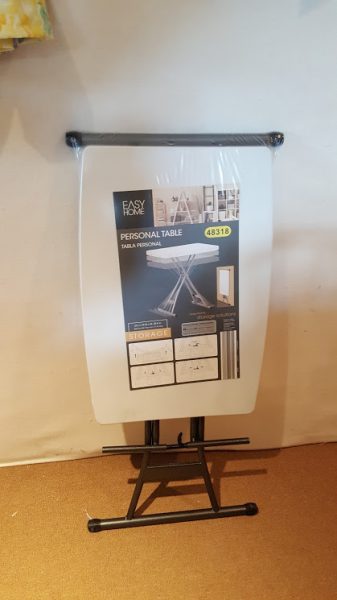 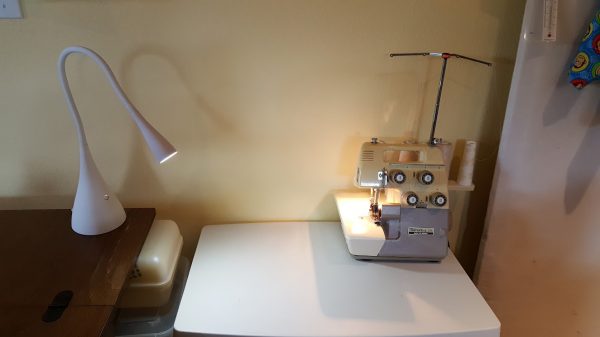 Aldi also had this LED lamp with the bendable neck. Perfect! I put my old serger on the table and it may have to go on the floor when the new machine gets here. Not sure how much room it takes up. Heck, I don’t know a blasted thing about the new machine. 24 hours ago, I’d never even heard of it and now I can’t wait for it to get here.

I’ve seen some adorable knit type patterns in Addie’s size, plus if I could find a great T-shirt type pattern for myself, I could make the adjustments to get a perfect fitting shirt and whip those things out and not have to always be searching for the perfect shirt. 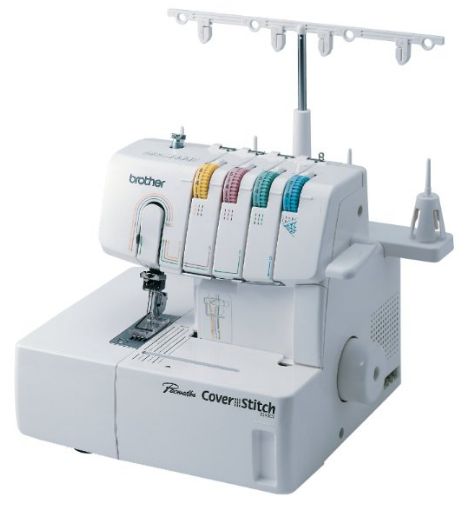 My friend had done the research and I trust her. I read the reviews . . as with most everything, some say it’s the best thing since sliced bread, some say “don’t buy it . . it’s a piece of junk”. I’ve learned that reviews are not very dependable and there were way more good than bad so . . I bit the bullet and ordered it. This is the one I got – just in case anyone else wants one!  🙂

I signed up for the Craftsy class (and I ordered fabric too!)

So . . please don’t anyone tell me about anything else you’re going to do that looks fun!  🙂