Did I just say last week that I was going to cut back on the number of knitting projects?  I didn’t seem to follow that plan but it all makes sense to me but maybe that’s just justifying bad behavior. 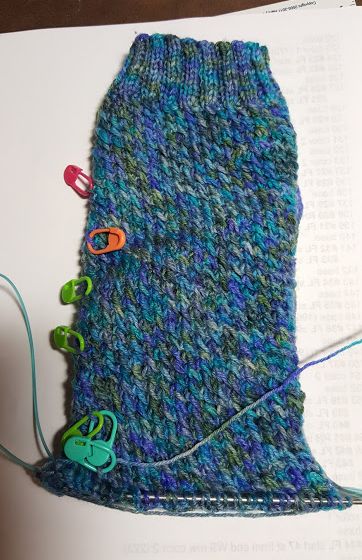 First, I started the qualifying sock for Sock Madness. I really wanted to participate in Sock Madness but I totally dislike the qualifying pattern. It hurts my hands – lots of knitting through the back loop. It’s a pattern that’s going to twist on my leg and I’m not going to like that. I’m to the point of increasing stitches for the gusset and doubt I go any farther. I thought about finishing the first sock and that would make me a “cheerleader” but seriously, I’m not real interested in finishing this sock. It has to be finished Tuesday (I think) and I haven’t ripped it back yet so . . I’ll see where I go with that. 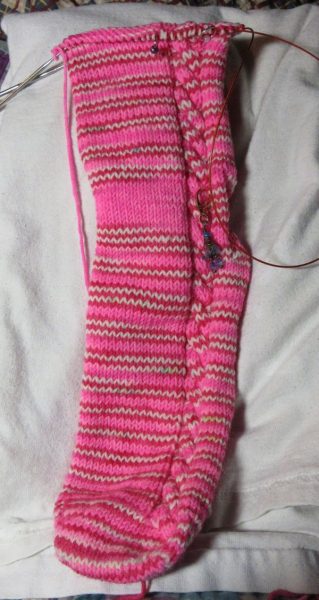 Sock on a Plane

Second, I started this sock. The pattern is Socks on a Plane. The yarn is Blue Moon’s Tigger Targhee, which I absolutely love for socks. I needed a no brainer type pattern – something I can take to the knitting group or knit while Vince and I are watching movies. Socks on a Plane is a very simple pattern with one cable along the outer edge of the foot/leg. One sock is finished. Second sock is started.

Third, I had finished the first sock and needed to get the second one done so I went ahead and started it. I’m in no rush to finish this but at least wanted to get it on the needles. No picture for that one. 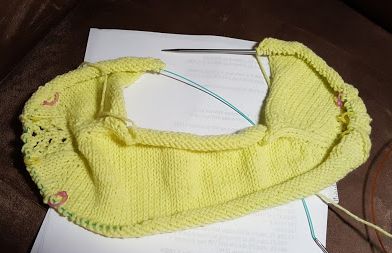 Fourth, I started the sweater for Addie that will match both the dress I’ve already made and the blue and yellow dress I want to make for her. The pattern is Tallulah and I think I will make it with long sleeves. 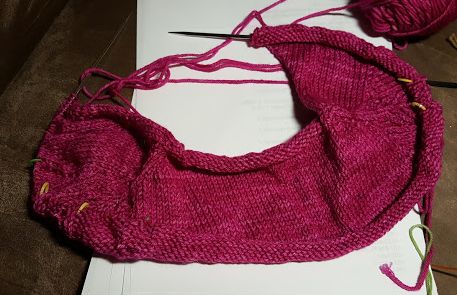 Fifth, I’m also working on a Tallulah for Addie for my final Loopy Academy project for this semester. If I run short of time, I can always make this one short sleeves, though kid sized sleeves aren’t a big deal.

Oh . . did I just say kid sleeves aren’t a big deal? That isn’t what I’m saying about Mim’s Chevrons, a sweater I started for Addie over a year ago. It’s just so many color changes. For the most part, I’m weaving the ends as I knit but still . . I will be happy to finish this sweater. That is the sixth project I’ve been actively working on this week.  No picture for that one.

Oh . . wait .. there’s a seventh. I had to go back and check to see if that’s right and it is. I’ve worked on seven projects this week. It’s a bit frustrating but if I finish seven projects, even if it takes a while, that will be nice. 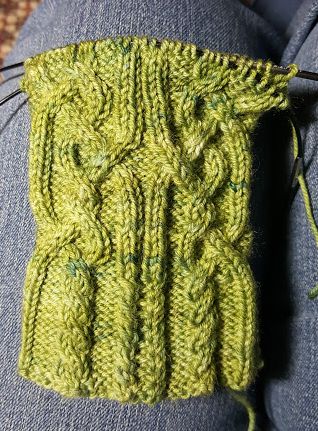 The seventh project is Jack of the Green. This is a mystery sock knit along and when I heard that it had cables . . I was in. The yarn is Lolo Did It Plush Sock and it feels so good! So far, I’m up to date with the clues and hope to stay that way and have these finished by the end of the month.