This post is being written on Thursday night . . we have more ice predicted beginning at about 4 a.m. and I don’t trust that our power will stay on when we have ice, though it always has before. I would be devastated if I couldn’t get the “On the Needles” and “Yarn Report” done so I’m doing those before I go to bed.

It’s been a great knitting week . . Vince went back to work . . it was too cold to do much outside. I’ve played a bit in the sewing room but Rita is going through one of her bad bathroom manners weeks so I’m staying in the house mostly and keeping a close watch on her. In fact, tonight, she has lost the privilege of sleeping on the sofa and will be locked on kitchen where it will be much easier to find any surprises she leaves for us.

Good morning! Don’t you just love hearing about doggie surprises when you first wake up?  Sorry! At least the skunk odor is dissipating and I can walk outside without . . TMI . . sorry . . use your imagination!

Over the weekend when it was so blasted cold (for Texas!), Vince was complaining about his ears being cold and I said “put on a cap” and he said “a baseball cap?” NO! And then I realized he doesn’t have a knitted cap. I found a quick pattern using bulky yarn and dug through my stash, past the pink and orange and yellow bulky yarn that I bought for a project Nicole and I were going to work on and found one skein of gray so I made Vince a cap and bless his heart, he has worn it to work, home for lunch, back to work, outside . . I’m waiting for more yarn to arrive to make him another one. It’s a crying shame to have all this yarn and nothing I could use to make a hat for my husband. Really . . I just don’t buy a lot of man colors. 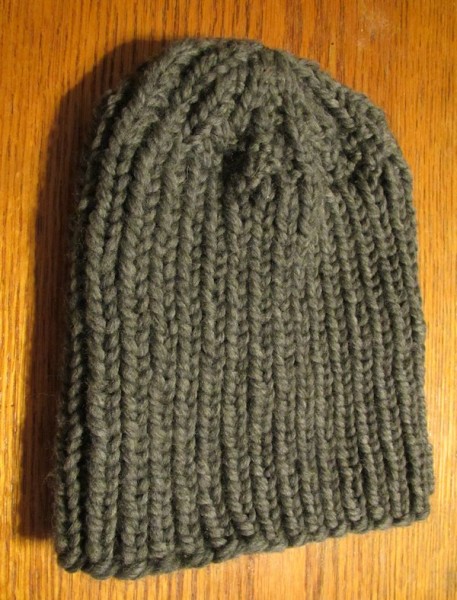 I finished the test knit for Laura Aylor. It’s blocking now. I think this could be my go to sweater! It’s kinda bulky (aran weight yarn) and will be great with jeans. I can wear a T-shirt under it or I won’t have to . . depending on how cold it is. The yarn isn’t itchy at all. The collar will roll so it won’t be nearly as high once it’s unpinned and left alone. 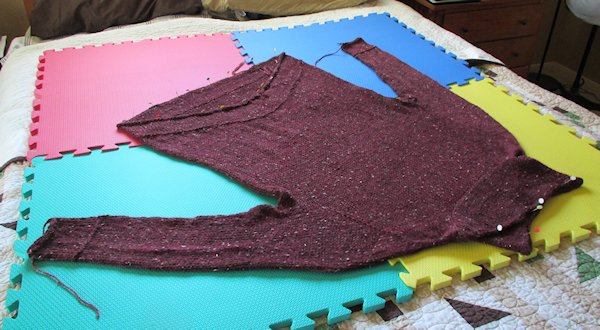 I’m making good progress on my Blue Sand though I never like showing sweaters before the sleeves are split off. It just looks like a big glob of knitting with no shape. Next row I will split the sleeves off, then the pace will pick up a bit not having to knit those stitches. 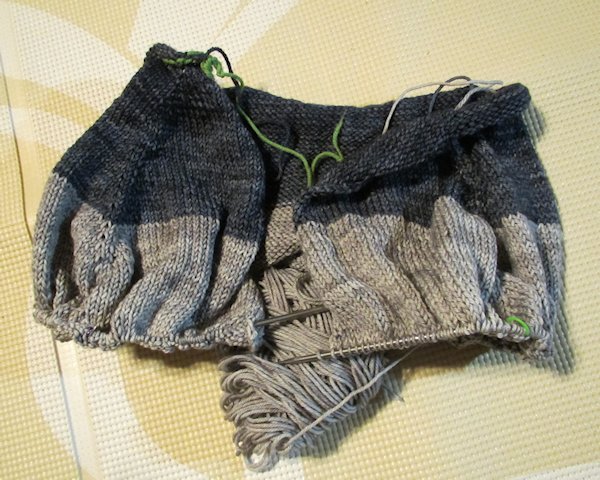 Finally, I’ve not worked on my Kynance Cove much for the past few weeks but since it’s to the point of knitting in the round, with no purls, I’m working on it part time because between the purls on Blue Sand and the cold weather, my hands are aching. The straight knitting isn’t nearly so rough on my hands. I love the colors in Kynance Cove. 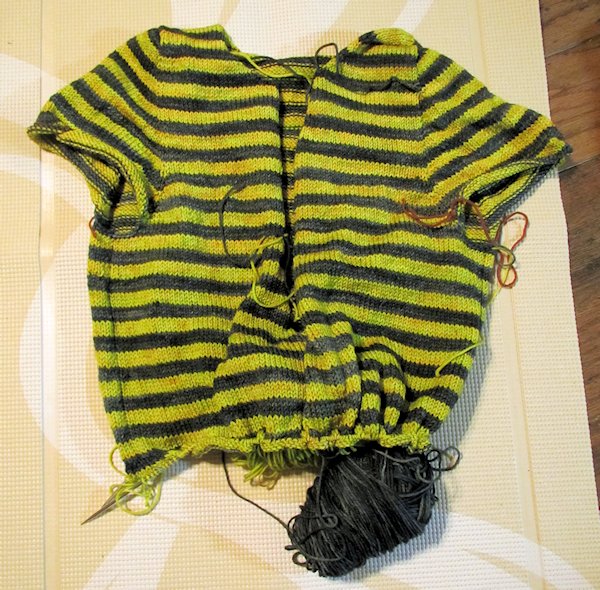 That was certainly a chatty knitting report. Vince is in bed sound asleep and I guess I just needed someone to talk to. Thanks!  🙂