When we had one chicken coop, we didn’t think much about making things easier. With one coop, there’s the waterer inside the coop and the waterer in the run. Every day, each waterer has to be dumped, cleaned and refilled. Sometimes during the summer when it’s so hot, I empty the outside waterer several times a day. The water coming from deep underground (well water) is ice cold and I know the chickens appreciate that.

The food container can be filled once a day or even once every other day so the water is the biggest issue.

We now have 4 coops and are going so that’s 8 waterers each day we have to dump, clean and refill.  Vince is going to build a better watering system that we can refill from outside the fence and not have to dump so often . . it won’t get dirt and crud in it.

Another hassle we’ve been dealing with is the heat lamp we have to put on the babies. They stay at 90º the first, week, then down to 85º the second week, then down to 80º and so on til the temp in their “brooder” is the same as the outside tempt. Since it was 93º outside yesterday, that wasn’t an issue but our nights are still pretty cool so we use a heat lamp and we raise and lower it .. and we do a whole lot of guessing because we don’t want them too cold or too hot. I had seen this thing last year and thought about getting it but I don’t think we got baby chicks last year and then I figured that our mama chickens would be hatching babies but . . you know what happened to the mama chickens. 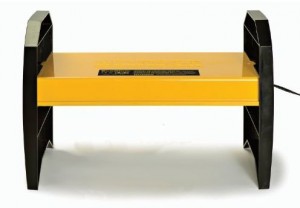 Now that I have the incubator and eggs coming, I just couldn’t stand do think about dealing with the heat lamp.  It’s hard to keep the babies the right temp in the winter but I think it’s even harder with our temps in the 90º plus range during the day and down into the 40’s at night.

This is the Brinsea EcoGlow Brooder Heater. It comes in several sizes. This one is big enough for 20 chicks and it has three levels. You can raise and lower it depending on the height of the babies. It just stays on and the chicks can get under it when they get cold. Believe it or not, they know when to get closer to the heat and when to get farther from it .. smarter than a lot of humans, huh?

The heat lamps are kinda dangerous. Nicole’s mom and dad had their chicken coop burn because of the heat lamp being too close to the straw. I worry about that a lot with our heat lamp so it will be real nice to have this safe little brooder heater and I don’t have to worry about freezing or frying any of my babies.