How did it get to be Friday so quickly?  I’ve had so little knitting time this week.  Yesterday I had dinner in the crockpot way before noon and planned to knit the entire afternoon and it was almost 10 p.m. before I touched the needles.  Things went downhill from there.  The yarn I’m using isn’t real smooth.  There’s nothing wrong with it .. it’s kind of a “rustic” type yarn and that’s how it’s supposed to be but every now and then, it’s a but too lumpy.  As I was working on the feather last night, I kept thinking . . this is ugly!  I finished the feather and finished the background but before going to the next feather, I said to myself . . I cannot leave that ugly feather.  I ripped all that out . . all the way back to Row 4 and tried to be very careful so as not to have too many horrible lumps but still ended up with a few. 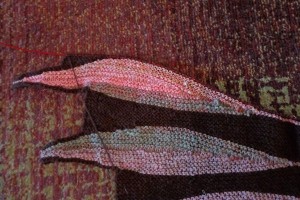 Can you see the lumps toward the right end of that top feather?  They look a whole lot better than the first feather did.  So, I ripped, stitch by stitch because I was so proud of myself, I had not put in a lifeline.  I was not going to bed til I had it ripped out.  At one point, I had planned to rip it out and re-knit it but at 2 a.m. I finished ripping and called it a night.  Too bad those darned chickens are awake at 6:40 a.m.

But, I did get the feather finished today and this is what I’ve done so far. 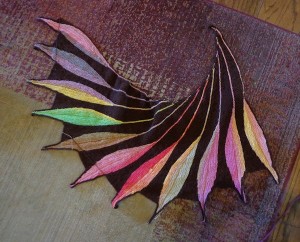 The green doesn’t look quite so bright without a flash!

This is one made by a reader without a blog. She told me that her feather yarn isn’t turning out like she thought it would . . she was hoping for yarn that changed color with each feather but I think her yarn is turning out very nice! 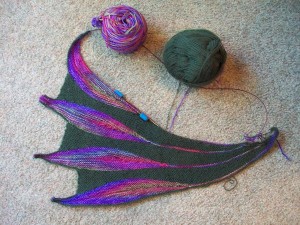