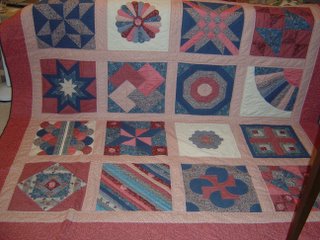 Finn’s post encouraged me to dig out my very first quilt! Back in the early 80’s, I was trying to find something to occupy my time during lunch one day. Shopping was my favorite thing to do back then and I came across a little quilt shop. I had always loved sewing and had played around with some of my grandma’s quilt patterns when I was a kid but I had never had a class or any “formal” quilt training. So, I signed up for a beginner’s piecing class. We were going to make a four block sampler. Well, I had too much fun and I made 16 blocks. This quilt, besides being ugly, is hand pieced and hand quilted (quite sparsely!) Looks like I had lots of fun fussy cutting those roses in some of the blocks. Heck, come to think about it, everything was fussy cut since it was all done with templates and scissors.

There was a little old lady who worked in that shop, Ava Broussard. I know I would never have stuck with quilting if she had not taken me under her wing and kept me enthused. I wish she could see me now! Ava was elderly back in the 80’s and I’m pretty sure she has passed away. She would invite me to her house for lunch sometimes. She lived in one of the BIG, old house in north Lake Charles . . where some of the first houses in Lake Charles had been built. Her husband had died and she lived in this huge house by herself and the neighborhood was rapidly going downhill. I always worried about her living there alone.

She made the best kibbi and she knew I loved it so she would make a big batch and freeze some for me to take home. And, she always had homemade lemonade! You know . . I might just try to make some kibbi soon in honor of Ava. I’ve never made it but it doesn’t seem like it would be hard to make if I can find a good recipe.

Then, in the late 80’s Ava began losing her eyesight and had to move from her big home where she had raised her children into a townhouse in Sulphur near her son. The new home was in a much safer neighborhood and was brand new and really nice. When Chad was born, she made a baby quilt (3 pigs) for him and I saved it so it still looks brand new. (But that baby quilt still isn’t as old as my first ugly quilt!) That’s probably one of the few baby gifts that I saved.

Well, this post has taken me down memory lane. Thanks Finn for prompting me to dig out my first quilt and remember how it all began.