Back when American Patchwork & Quilting magazine began collecting blocks for the breast cancer auction, maybe in early 2004, I was a member of Alex Anderson’s message board (AAMB – which no longer exists). We decided to have everyone who wanted to participate send me a friendship star . . light pink star on a dark pink background or vice versa. And, they were to send me a fq of the background fabric for the sashing. So, I made the quilt, quilted it and sent it in.

I patiently waited for the auction to begin so I could try to get our quilt back. It was in one of the first few batches of quilts and I began to bid and bid and bid! Like everything I really want on ebay, someone else really wanted it too! So, it got way above my price range and I gave up. Right before the auction ended, I ran back to ebay and tried a couple more times but by now it was WAY above what I could pay and I was pretty relieved when this determined person outbid me AGAIN.

There’s a very generous lady who was also on Alex Anderson’s MB named Vicky. I asked one of our mutual friends, Sally, if Vicky was the one bidding and she had no idea (so she said!). After the auction ended, Sally and her DH did a little investigating and tracked the winning bidder back to somewhere in east Texas. They even gave me the lady’s name and I looked her up on whitepages.com. Another friend, Gwen, said she had a sister near this person and she would contact her and let her know the details of the quilt. This was all back in July or August, 2004 I think. Both Sally and Gwen (and most everyone else) knew it was really Vicky and they were probably sweating buckshot when I said I might contact this person myself! Thankfully I didn’t try to contact that person .. she would have thought I was nuts since Sally and her DH had just made up this person’s name and then I found her!

So, from last summer til this summer, I would think about that quilt every now and then and wondered why someone had wanted it so badly who had not been a part of the group making the quilt. I’d wake up some mornings and as I was laying in bed thinking about what I’d work on that day, I’d think about the pink quilt. I had decided that the winning bidder had someone special in her life who had been touched by breast cancer, this person loves pink and so . . she kept outbidding me to get the quilt.

Then, last weekend I hosted a retreat at Paducah. There were 37 of who us attended and almost all of us had met and gotten to be friends on the AAMB. Vicky was to come but she couldn’t be there. The first night, Sally said she had a note to read from Vicky because everyone was so disappointed she couldn’t be there. Well, it wasn’t a note to everyone at all but a note to me from Vicky telling me how much I had helped her along the way with her quilting and they presented me with that quilt. I was so shocked and so thrilled. I felt so bad that I had been bidding against Vicky on that quilt and . .everyone else at the retreat had known for months that Vicky had the quilt and was going to give it to me. Wasn’t that the sweetest thing? I still can’t read Vicky’s note without crying!

Vicky calls it the “boomerang quilt” because it came back to me and I am so thrilled to have it back! 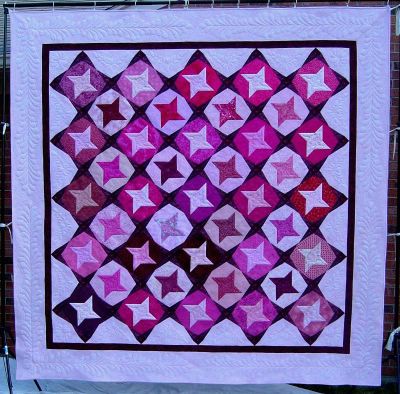 Friends for a Cure – the Boomerang Quilt